The Regulators’ music defies easy description. Are they a rock power-trio? A jazz group? A funk band? An Andean pan-flute ensemble? They are most of these things and yet they are none of them. They are a free-funk-jazz exploration of non-western rhythmic modes. Whatever genre you want to call their music, a few things are certain: it’s groovin’, it’s exciting and it’s bad-assed. This is musical high-wire without a net.

Formed in mid-2008 as the global economy appeared ready to do a stage-dive during sound-check, The Regulators are Mike Allemana on guitar, Gerald Dowd on drums and Matt Ferguson on bass. The band spun itself off from a pre-existing group–BrianO’Hern’s Model Citizens Big Band–where they had already commenced with their trademark rhythmic explorations during the extended free-inventions which typically mark the close of each Model Citizens set. Brian points his finger and away they go. One moment it is Funkadelic getting in touch with their inner-Bulgarian, ten minutes later a wall of noise-rock and five minutes after that, King Tubby in a klezmer band. Anything can and will happen. This was too good to just go down once a month at the end of a big-band set so the three decided to form the Regulators and start doing their thing all night long. Since then they have been doin’ it about once a month at various venues; currently they call the Gallery Cabaret home every first Wednesday of the month (in addition to playing together with the Model Citizens at the Gallery Cabaret every third Monday). Check the schedule for our next shows.

Check out the Regulators Flyer Gallery. 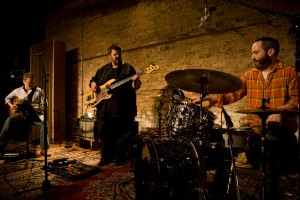