As jazz musicians, we find ourselves in all kinds of musical situations throughout our career.  When we’re young and learning to develop an improvisational voice, say the early to mid-20s, we go to jam sessions, hang out with musicians at clubs and parties, put together playing sessions at musicians’ homes, have the periodic gig full of musical epiphanies, and have even more gigs of mediocre misery. We pay our dues, and through the battle in the “trenches” (Von Freeman used to say “Michael, the trenches will make you strong!”) we start to develop our sound, play better gigs, maybe play less gigs, maybe more, but we continue on the path of searching for new musical worlds to assist in bringing forth our inner musical voice.

In 1996, at the age of 26, I was practicing 6 hours a day, playing with Charles Earland and Lin Halliday, and picking up what gigs I could to make the bills.  The previous year I had become friends with bassist Matt Ferguson, pianists Brian O’Hern and Dan Trudell, drummer Gerald Dowd, saxophonist Pat Mallinger, and several others, so come 1996, I was part of a community of young jazz musicians, one that was daily trying to find their voice and find gigs to grow musically and pay bills.  At this time, Brian O’Hern had been itching to start a big band.  He asked me, along with Matt Ferguson and Pat Mallinger among many others, to play a gig in March 1996 at Martyr’s, 3855 N. Lincoln Ave. That fateful gig initiated a search for original musical sound by O’Hern with myself and many others growing and searching with him, a search that has continued once a month for 20 years.

On March 20, 2016, Brian O’Hern and the Model Citizens will be celebrating these 20 years of musical growth and friendship.  I am so proud to be part of this project not only because of O’Hern’s continuous musical experimentation, but also because Brian and the other cats have created and sustained a musical community. This is rare in our times. O’Hern’s musical personality, the high caliber musicianship among the collaborating musicians, and the sacrifice that the Gallery Cabaret’s owner, Kenny, made to allow this band to perform in his small club once a month have helped bring people together around music.  I am deeply grateful to Brian for allowing me to be part of something so musical, challenging, and beautiful.  Please come celebrate musical community with the Model Citizens where it all started:

Brian O’Hern and the Model Citizens

I am super excited to be performing with saxophonist Caroline Davis this weekend.  She comes back to Chicago for some cool gigs.

December 4th and 5th at Andy’s jazz club, 10 E. Hubbard, 5pm-8:30pm. We will be performing tunes that Lin Halliday and Von Freeman loved to perform. It was fun getting these tunes together, going back to the old charts I made with Lin.

Playin’ with jazz vocalist Tammy McCann and a great quartet this week.  Come on out.  All shows 8pm and 10pm, with Tammy and the CJO doing a matinee on Sunday, October 11 at 4pm.  Howard Reich wrote a nice review for the Chicago Tribune.

This Saturday, September 26th, I am so honored to be performing at the Hyde Park Jazz Festival with my long time musical partner, bassist Matt Ferguson.  He and I will be performing duo sets at the Robie House, 5757 S Woodlawn Ave, at 5pm, 6pm, and 7pm, all short 30 minute sets.  More info:

George and I will be back at it again this year to celebrate his birthday with drumming legend Bernard Purdie.  Don’t miss it.

Bernard is on the cover of Modern Drummer this month!!

A new steady begins next week with one of Chicago’s great jazz singers, Tammy McCann, at Drew’s Drawing Room (formerly Jack’s on Halsted) at 3201 N. Halsted from 8pm-11:00pm.  I am really excited to be working with Tammy.  She hung out a lot with Von Freeman and was close with one of my mentors, pianist/organist Jon Logan, who was Von’s pianist at the New Apartment Lounge for many years. (Check out her new CD with pianist Laurence Hobgood.) We’ll be swinging on Thursdays in January and February, so come on out!!

One of the coolest things about Gabriela’s school, Hawthorne Scholastic Academy, is how the parents really care about the school and their kids’ education.  One way the parents come together is with the Thornes, a band of Hawthorne dads.  I’ll be performing at Schuba’s on Thursday November 20th with the Thornes. We’ll be doing some rock and blues hits and a couple jazz tunes.

Today is Von Freeman’s 91st birthday.  Missing him more than ever.  Lately I’ve been missing his rock solid advice; whenever I felt lost he always got me back on the path.  With all the interesting courses and the dynamic academic scene at University of Chicago, I’ve been feeling a touch lost; his wisdom would be perfect right now.

Here is one of my favorite solos from my years at the Apartment Lounge:

Here’s a photo of us recording “The Improvisor”: 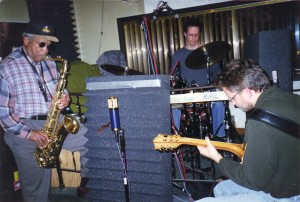